A bad day for Forbes.....Tillyangus and Corgarff

Today I had a couple of games today with some friends to test scenarios from my next book, Feud, which covers the Gordon - Forbes feud and the Marian Civil War in the North East of Scotland in the 16th century.

Having played out Corrichie and Craibstane previously, Tillyangus and a fictional scenario involving the burning of Corgarff Castle were on the table today.

We used Lion Rampant 2nd edition with few of the amendments suggested in the Renaissance Rampant mods which were in Wargames Illustrated, written by Oli of the rather excellent Camisado Blog. I am now quite happy that Lion Rampant and not Pikemans Lament make for a better set of rules for this period - perhaps it's the minor changes to second edition or that these skirmishes between rival families are more suited to a medieval style of warfare despite being set in the latter half. of the 1500's

We opened with Tillyangus - here a band of Gordon's led by Adam Gordon, brother of the Earl of Huntly, and on their way to Edinburgh were attacked by the Forbes's under Black Arthur Forbes of Balfour.

I have a different view of the battle from the presented in Marren's Grampian Battlefields and wrote the scenario based on the points I set out in the book following a visit to the site and a review of the sources, archaeological findings and some practical considerations too! But to the game... 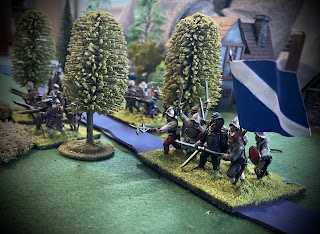 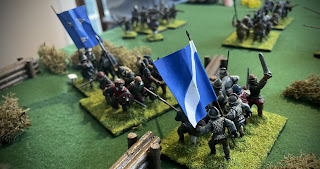 The Gordons came down the road from Auchindoun through Clatt and bumped into the Forbes men. Both sides tried to find an open flank but it was the Gordon hackbutters who caused the damaged to the Forbes foot and softened the way for the Gordon's to drive the Forbes out of their position and back towards their castle of Druminor. The melees were sharp and bloody and Black Arthur fell not far from the Forbes position, instead of during the historical rout, but otherwise the outcome was the same and the Gordon's won the day.

After a spot of lunch and a catch up we played my Corgarff scenario.

After defeating Forbes again at Aberdeen, Gordon now had control of the North East and set about making sure his enemies were completely subdued. To this end he rode to lonely Corgarff castle, high up on Donside where he found Lady Forbes of Towie and her family. As is told in the traditional Ballad Edom o'Gordon, Lady Forbes did not surrender and barred the tower door against Gordon, (or his henchman Kerr). Frustrated by this, a fire was set and the tower burned down, with the unfortunate Forbes family inside. In the scenario I have Forbes of Towie riding to the rescue with horse and local foot, racing to drive of Gordon and Kerr before it is too late.

In our game the Forbes's arrived and drove Kerr and his men off,  but Adam Gordon proved more difficult and with his horse cut up first one and then a second unit of his foes, ultimately breaking and routing them from the field. There was to be no rescue this day! It was a close game though and the had the dice gone the other way it would have been Adam Gordon routed, so the scenario was balanced. 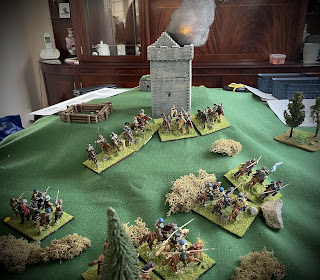 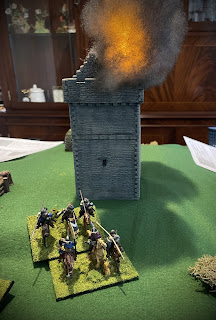 Two good games with John and Eric taking the Forbes's and Bill taking the Gordon's.

I have a few minor tweaks to make to the scenario's as I've written them and then the last few paragraphs to write before proofreading and off to the publisher, ready for printing in the new year.

These figures from Crusader Minis were inhabiting a drawer and needed to be painted. So out they came last weekend and I finished them off the morning. The flag is a design I found online and dropped into ms paint to remove the white background. No need to be really neat at this scale when it gets reduced down any unevenness is lost. The three horse design are probably a bit pagan, and would bring the local priests displeasure, but it makes a fine flag for cavalry. 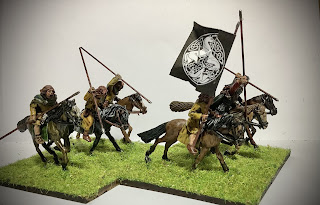 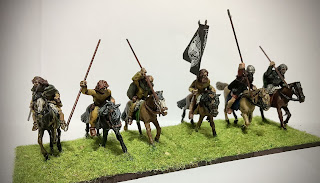 My Renaissance Irish now have 3 units of Kern, 2 gallowglass and 2 each of shot and bows, plus these horse. A nice compact force which I think I will put on the table on Tuesday at the club.  We played lion rampant with the Renaissance mods from WI and once the players got their heads round the differences in initiative and styles of combat, it made for a good game.

Email ThisBlogThis!Share to TwitterShare to FacebookShare to Pinterest
Labels: 16thC

Artillery crew. The fellow in the fine helmet is a Bengal Horse Artillery gunner. 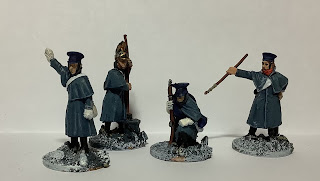 I also rebased my 16thC Irish/Highland Scots to match my other 16thC stuff. A mix of Perry and Scheltrum figures left over from when I painted figures for the Harlaw anniversary game. Currently flagged up as Irish I can switch them over to Huntly's missing allies from Badenoch and Sutherland should I please, or even the highlanders who fought against the 6th Earl at Glenlivet. 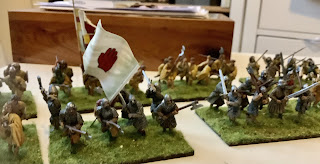 Patriots Rebellion - the British and the Patriots

The Patriots Rebellion was an uprising in1837-38 by discontented french speaking Canadians who wanted to maintain their heritage and culture in the face of anglicisation and who sought a wanted to restore a French speaking Canada or a least part of it. As the uprisings were dealt with in Canada, some of the leaders crossed the border to the US and, pushing on an open door, managed to recruit support which led cross border incursions into Canada between American sympathisers and the British army. Now that's a greatly condensed and simplified attempt at a summary that leaves out a lot of details, politics and subtlety. But this isn't a history lesson it's just an introduction!

The British deployed elements of several line and militia regiments to deal with the situation. As many of the actions were fought in cold weather 1830's British in greatcoats from Iron Duke from Empress and Studio, now from Bicorne can be used. The Militia are a bit more difficult, but as they tended to follow regular uniform or wore civilian clothes, some assumptions can be made. The European figures in Empresses various 19th ranges are a good start.

Below is a picture of the British Troops I'll be using.

The Patriots and their American allies are more difficult to represent and ranges for the SYW, War of 1812 and Alamo have to be plundered to come up with figures. Happily though these ranges have some great sculptors and similarly scaled figures. I used North Star Musket and Bayonet figures and some Artizan Texans. The blanket coat was a popular and practical winter garment and the hunting shirt was commonly worn too. The only thing I tried to avoid was Indian style leggings. The only thing which I've not been able to find -and my modelling skills are too poor to allow - is the folk who didn't have firearms and were armed with pikes and agricultural implements.

Below are my Patriot figures. 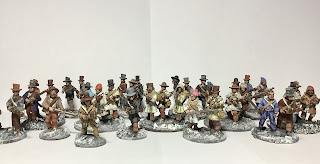 These were painted for me by Stuart Foley and rather good they are too.

Scenery and terrain are easier - stone or timber buildings from the AWI are perfect. Rail fences common and north American scenery in general is spot on. I'll be picking some fences up from Emperor Toad who makes some nice winter scenery.  There is one iconic building which I need though and that's a large, tall stone windmill. I may have to get that custom built - we'll see!

I've finished basing my mutiny figures now. A mix of Iron Duke and Foundry - the latter on a cardboard shim to lift them just a little bit higher to match the slightly taller Hicks sculpted figs.

These are a unit of the Iron Duke mutineers - with  flag I found online. They'll take the field on Tues evening at a club game. 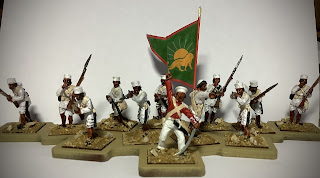 I also came across a 19thC civilian who reminded me of a well known whisky logo.... Meet Sir James Walker, Her Majesty's Agent At Large and commander of the Moray Militia in the recent unpleasantries with Russia*. Also known as Johnny to his friends. 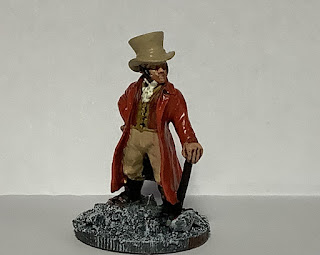 *more of this to follow at a later date!