You spend ages waiting on one bus....

A rather hectic day at work was improved by the arrival of not one but three parcels for me.

First off was a rather large and heavy box which contained a Spanish Town which I won on EBay, sold by Mike Siggins. Very nice and complimenting my existing Italeri church and houses. 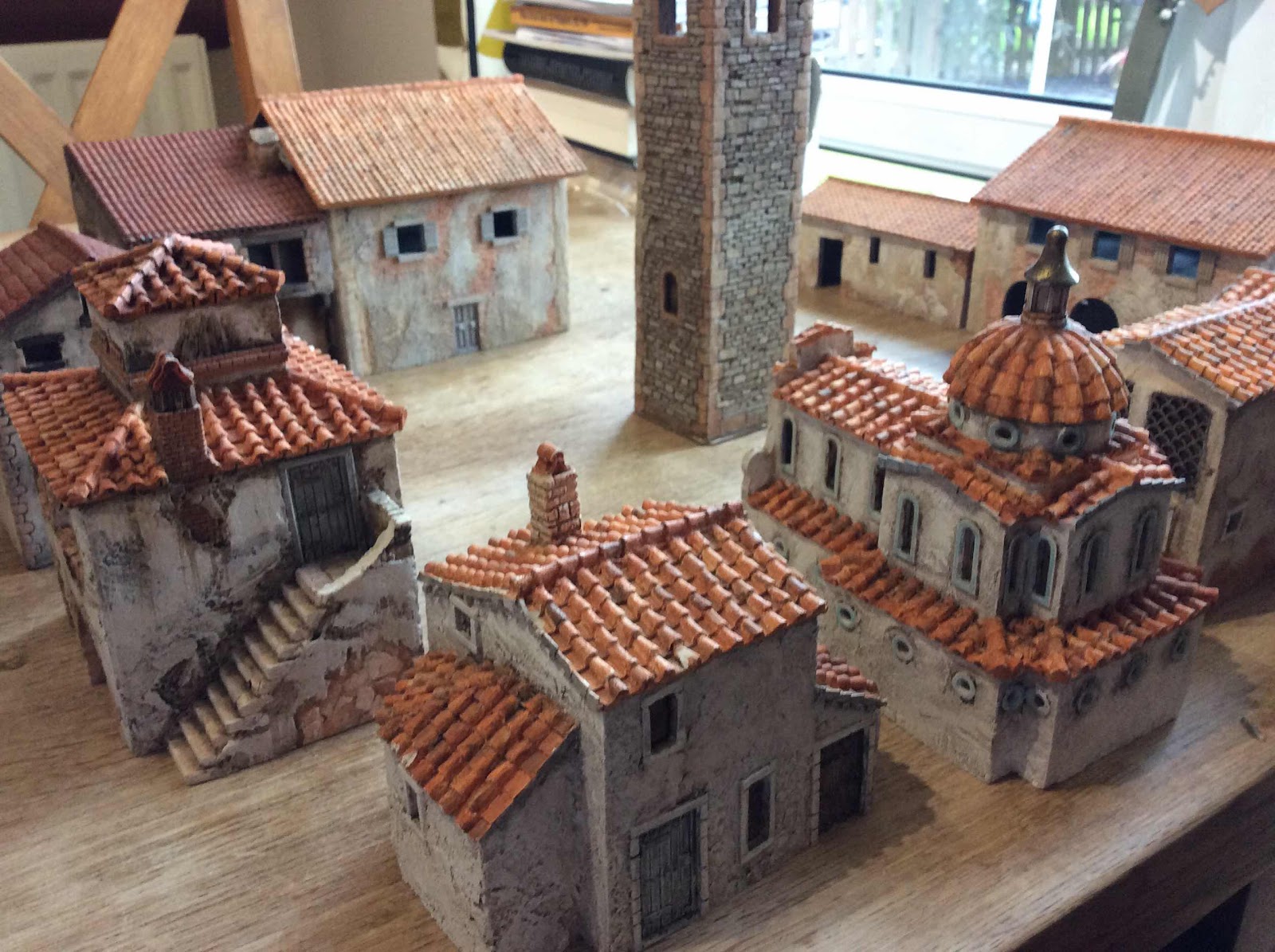 Very useful for my next project but also for Spain and Italy and probably the south of France, Balkans and a few other places. 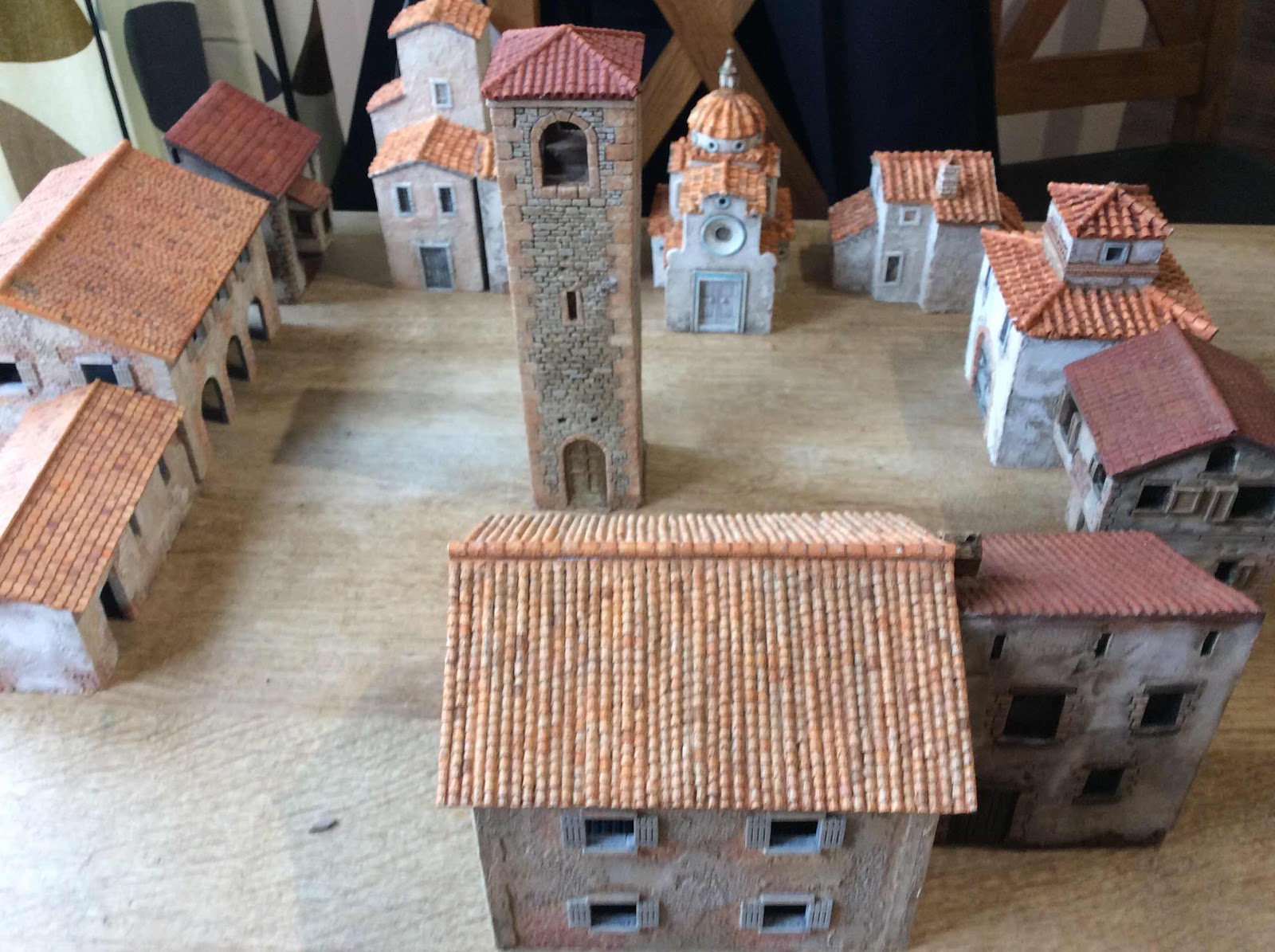 Next up came this book. I will leave you to work out how the two things tie together! 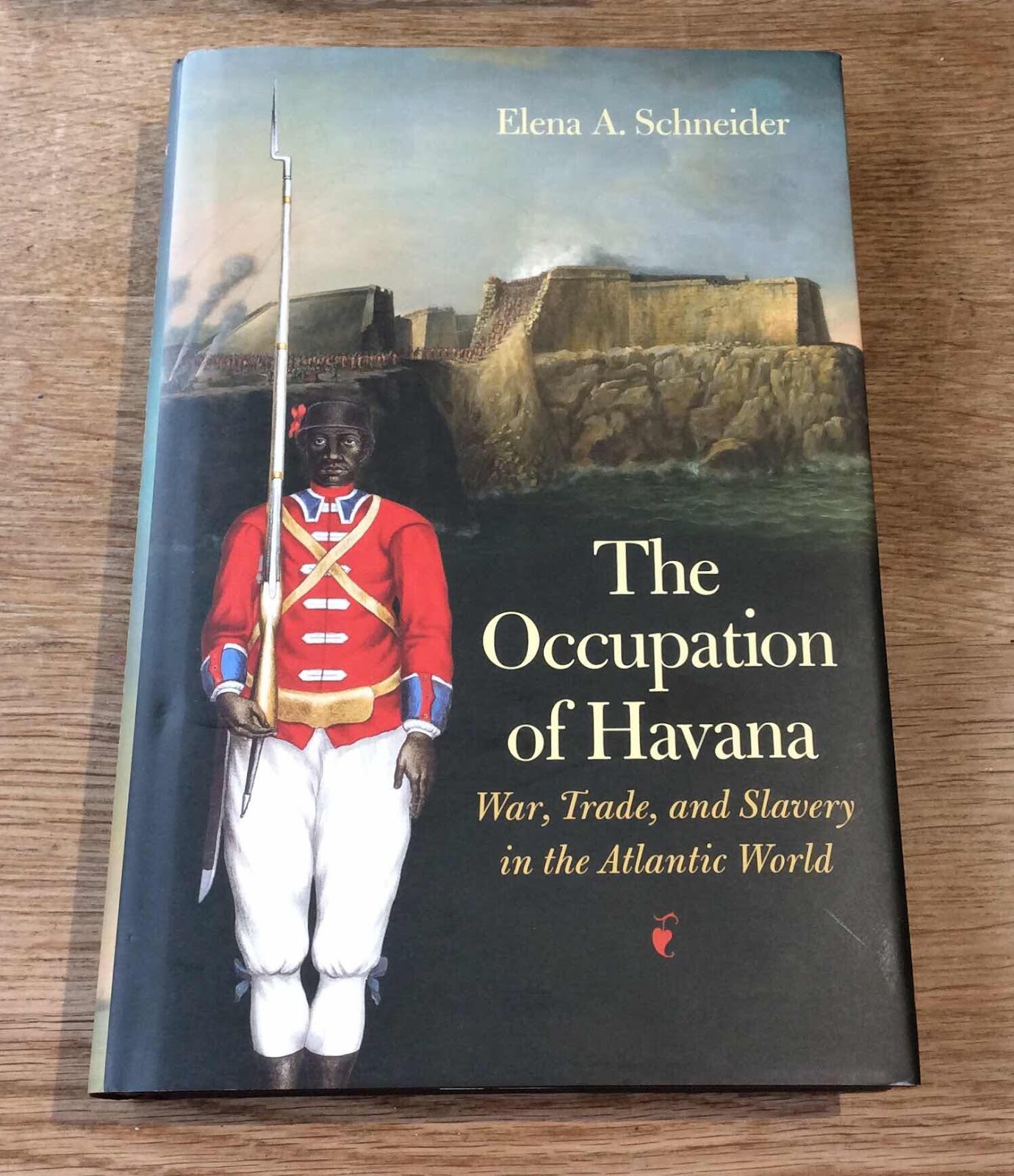 Also delivered by the postie was a small box. Hot off the casting machine (well still pretty warm since I ordered them only on Saturday!) these are the new dismounted Cossacks from Warfare.

Although not quite as well fed than my GNW Russians they are a decent match for height and will be taking the field against them rather than along side them. I really like them although I will need a few packs to make sure I don't have too many guys waving their hats. They should make a nice match for my TAG mounted Cossacks too. 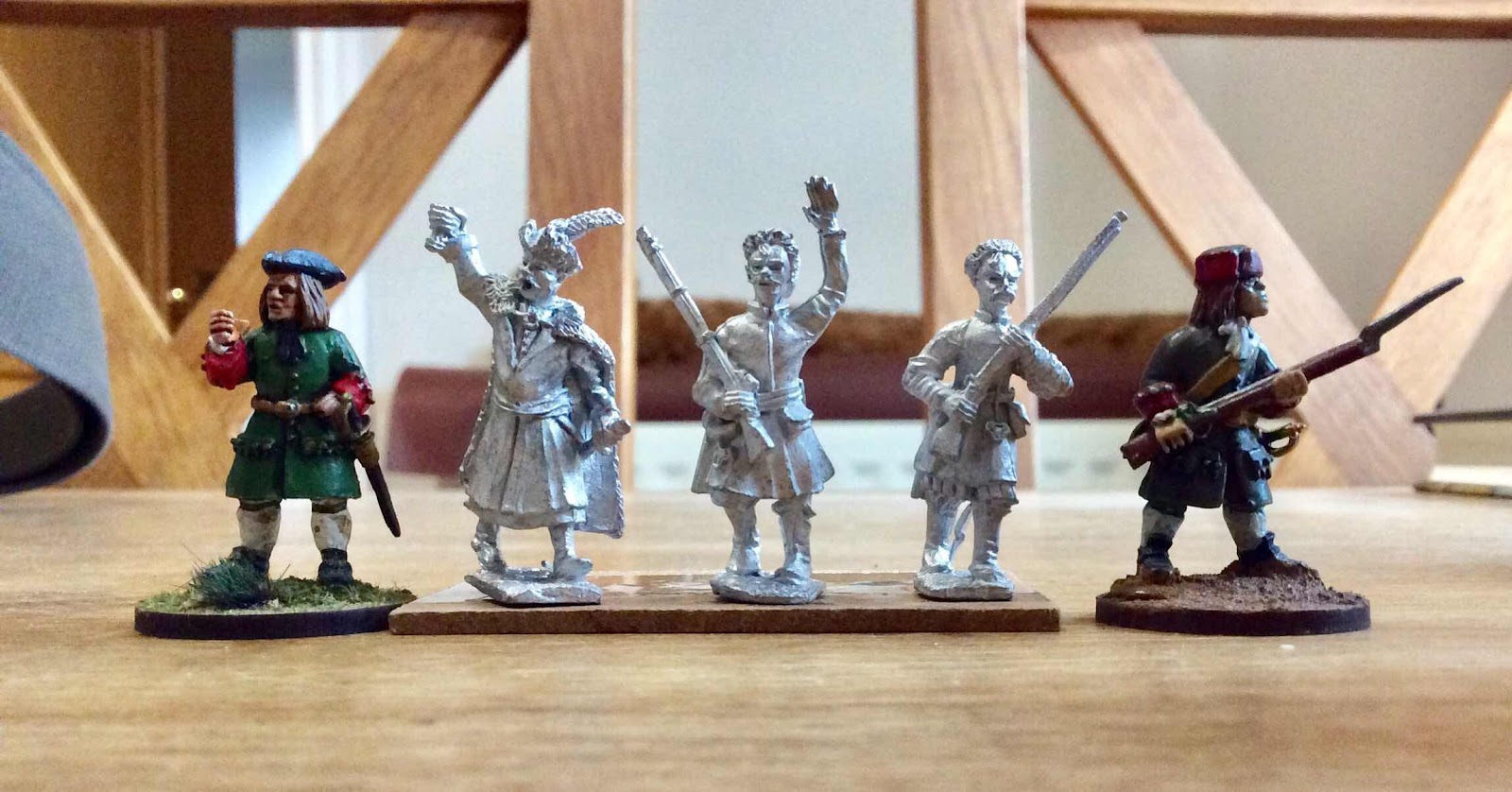 Lastly and delivered via email I received a set of rules to playtest from Jim Purky. More on these another time!

It's all go here.

My head is now spinning in the opposite direction....in a good way.🤪

Back in November I released the Wargaming the Sugar Islands Campaign book. Seven months later I am about to order a second batch from the printer as the first batch of copies are all but gone. Battles in Martinique and Guadeloupe are being fought in all over the world from New Zealand to Canada and Germany to the USA.

At the weekend Graham Cummings of Crann Tara ran a Sugar Islands inspired game at Partizan in the UK. You can find a few pics on his blog here. Scotia Albion Blog

Mark Luther also ran a game in Georgia at the weekend, this time in 15mm. Mark has posted some pics to flicker here. Mark Luther's Game

Huge thanks to everyone who has purchased a copy so far. Feedback has been excellent. Another batch will be on the way from the printers shortly and copies continue to be available from me directly here using the Contact Form on the blog, as well as from Crann Tara at shows. Price is £8.00 (plus any postage).

Meanwhile work continues on the follow up publication. As well as the Spanish troops I have been painting I have purchased some very nice buildings which will do very nicely for further games in the Caribbean. More on this when they arrive.
Posted by StuartInsch at 12:30 2 comments:

Lovely long weekend visiting the Wallace Memorial, Carronade, catching up with folks, meeting friends and then a lovely topdown drive home via a snow flecked Glenshee, then Braemar and Ballater. What a great way to unwind.

First time at Carronade and I must say I'm impressed with the show. It's a little bit of a maze at times for the first timer, remembering who was where with what resulted in several trips to the wrong bit of the wrong building but I enjoyed it more than Salute and think it tops Claymore as the top Scottish show now. 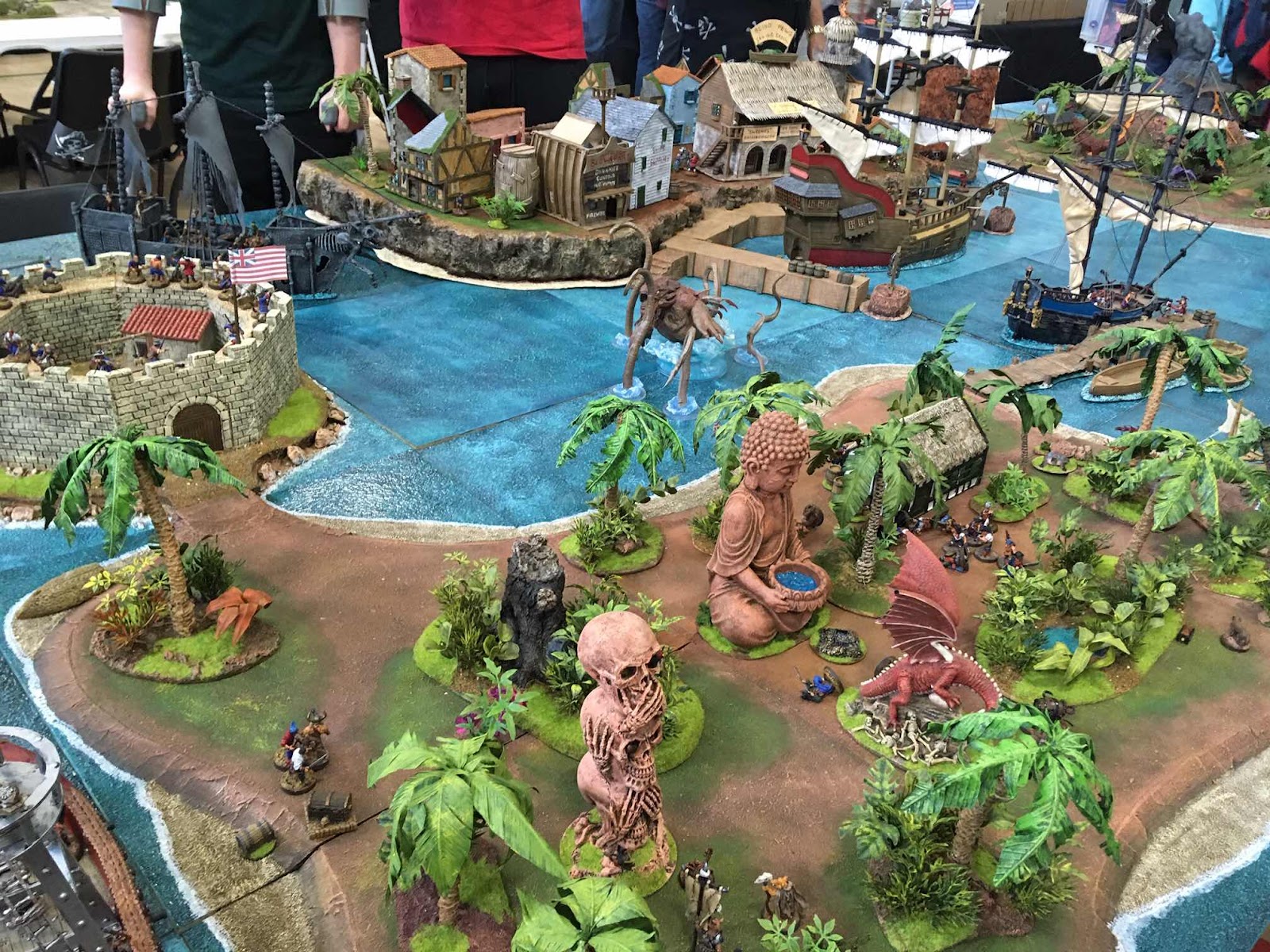 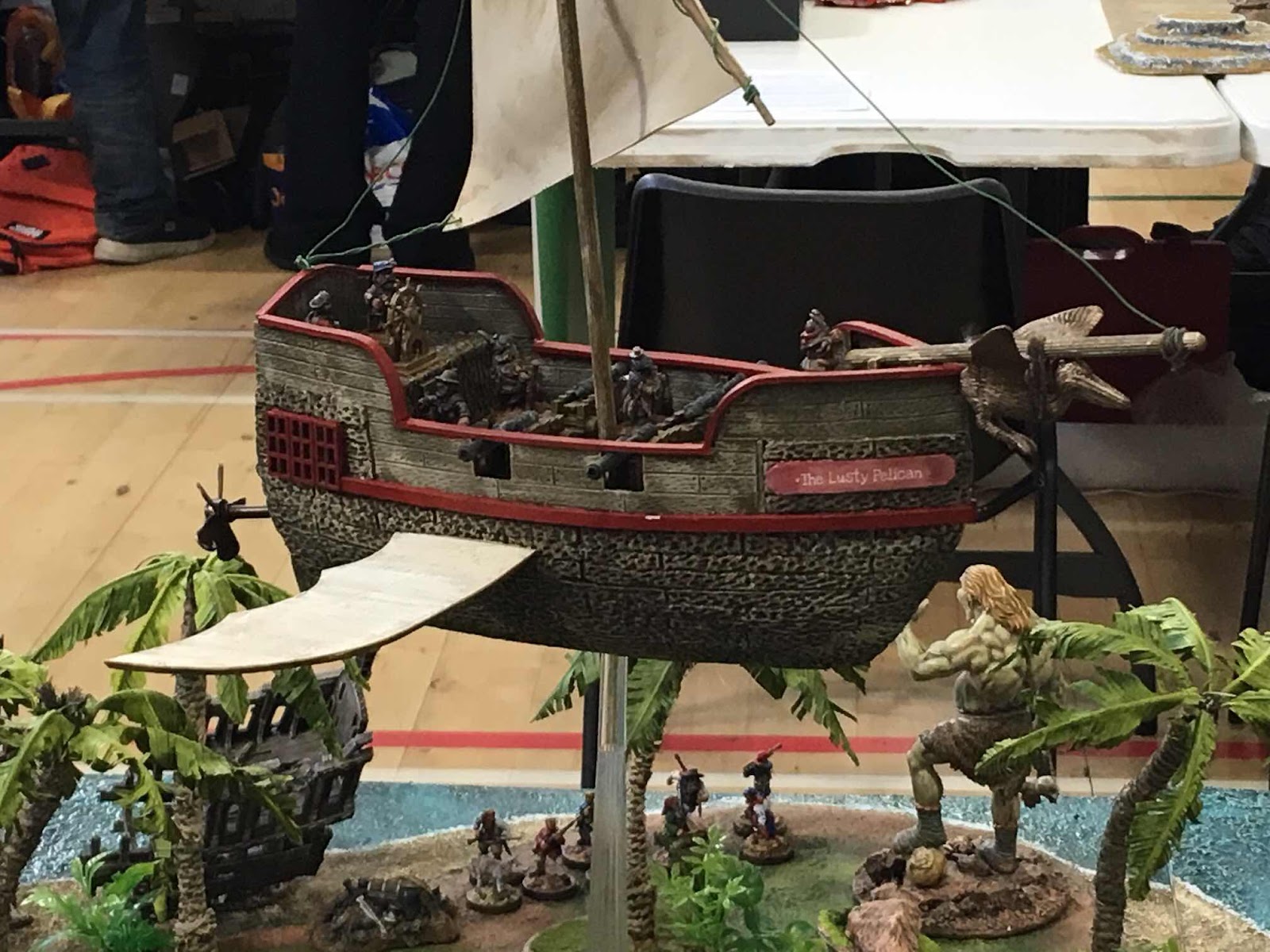 The other was the Sudan game pictured below. Lovely buildings and the fort in particular was a nice piece of real estate. 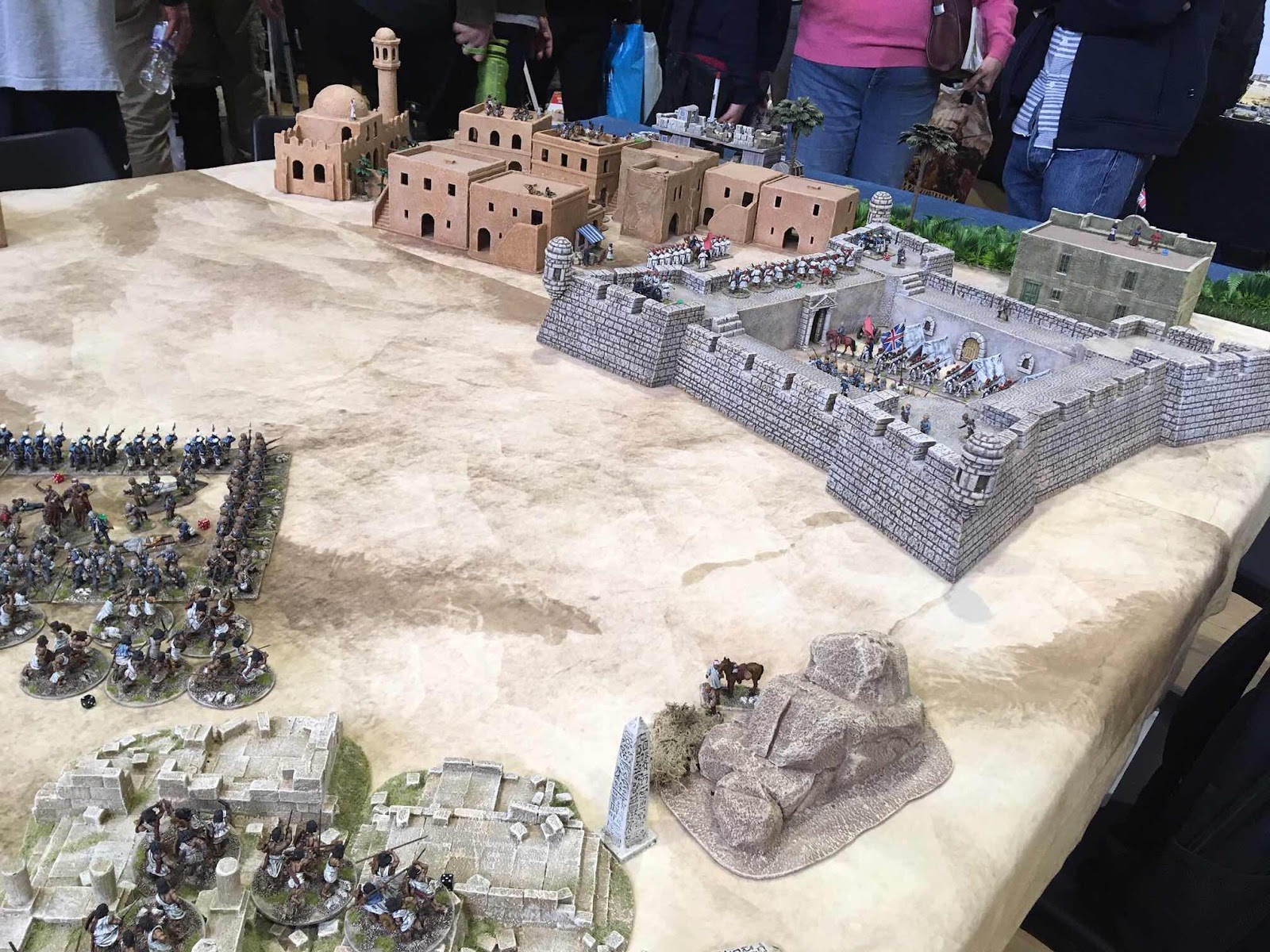 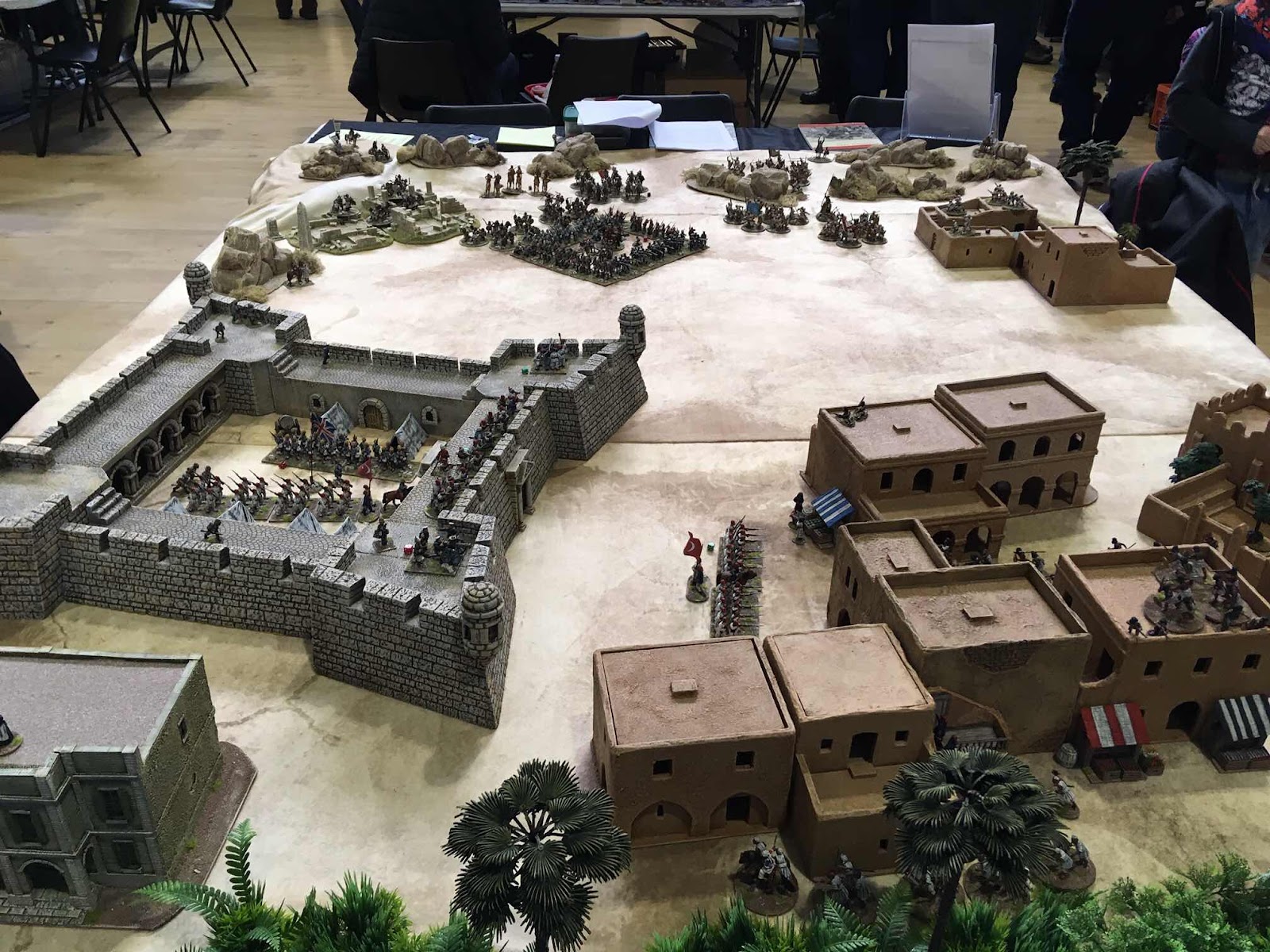 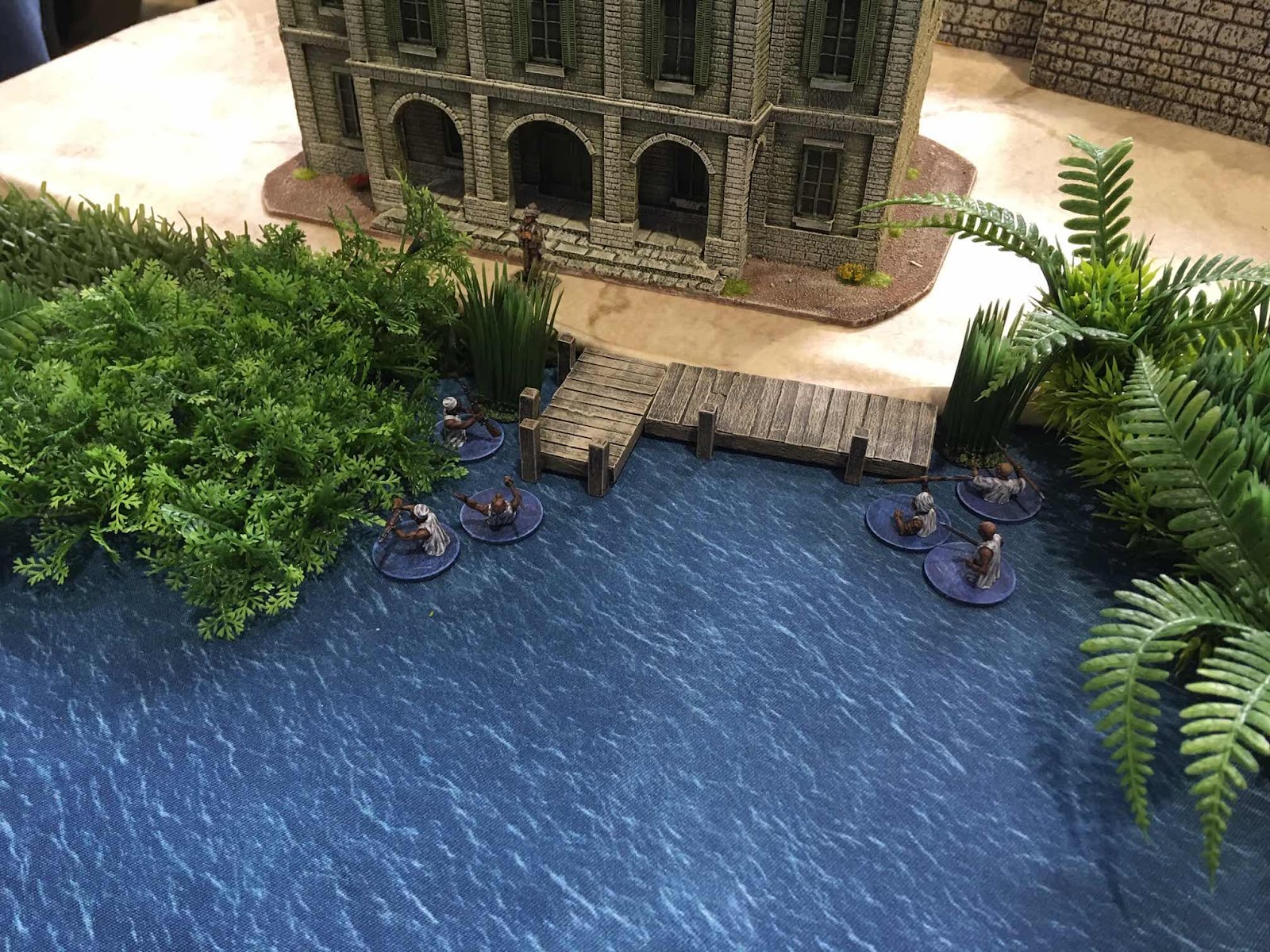 Caught up with GrahamC on Crann Tara and got my horsies. Got to see his new figures in the flesh so to speak and aqm even more impressed. His trial of 3d design and printing is also going well and should evolve into something commercial at some stage.

I didn't get much of what I was after. Dave Thomas didn't have the Perry stuff I needed, Foundry didn't have Crimean or Mexican stuff and at one point all I had to show for there day was some mdf bases as a a booklet on the Swedes. However Gav from gamingfigures had some nice redoubts which would look good on a Caribbean beach, so I cleaned him out.

All in all a great weekend and lovely show too. I'll be back next year.
Posted by StuartInsch at 15:04 5 comments:

Looking forward to going to Carronade this weekend.  It's my first trip to the Falkirk show so I will be very interested to see what it's like compared to small and friendly Targe in Kirrimuir,  busy Claymore in Edinburgh and the vastness of Salute. Not only that but the sun shining and the sky clear so I'll be able to scoot down in the Spider and have a weekender with my better half too. It doesn't get much better.

I am looking forward in particular to catching up with Crann Tara. Graham output of late has been some of the best figures out there in terms of pose and sculpting form. I am slowly putting together the Spanish for my next Caribbean project and will be making much use of the naval landing party, pioneers, marines and other wonderful goodies that are being added to Graham's stable.

I have got about half way through another regiment of Spanish,  I am pretty pleased with the results so far. The next unit will be in blue, much easier than white to paint! 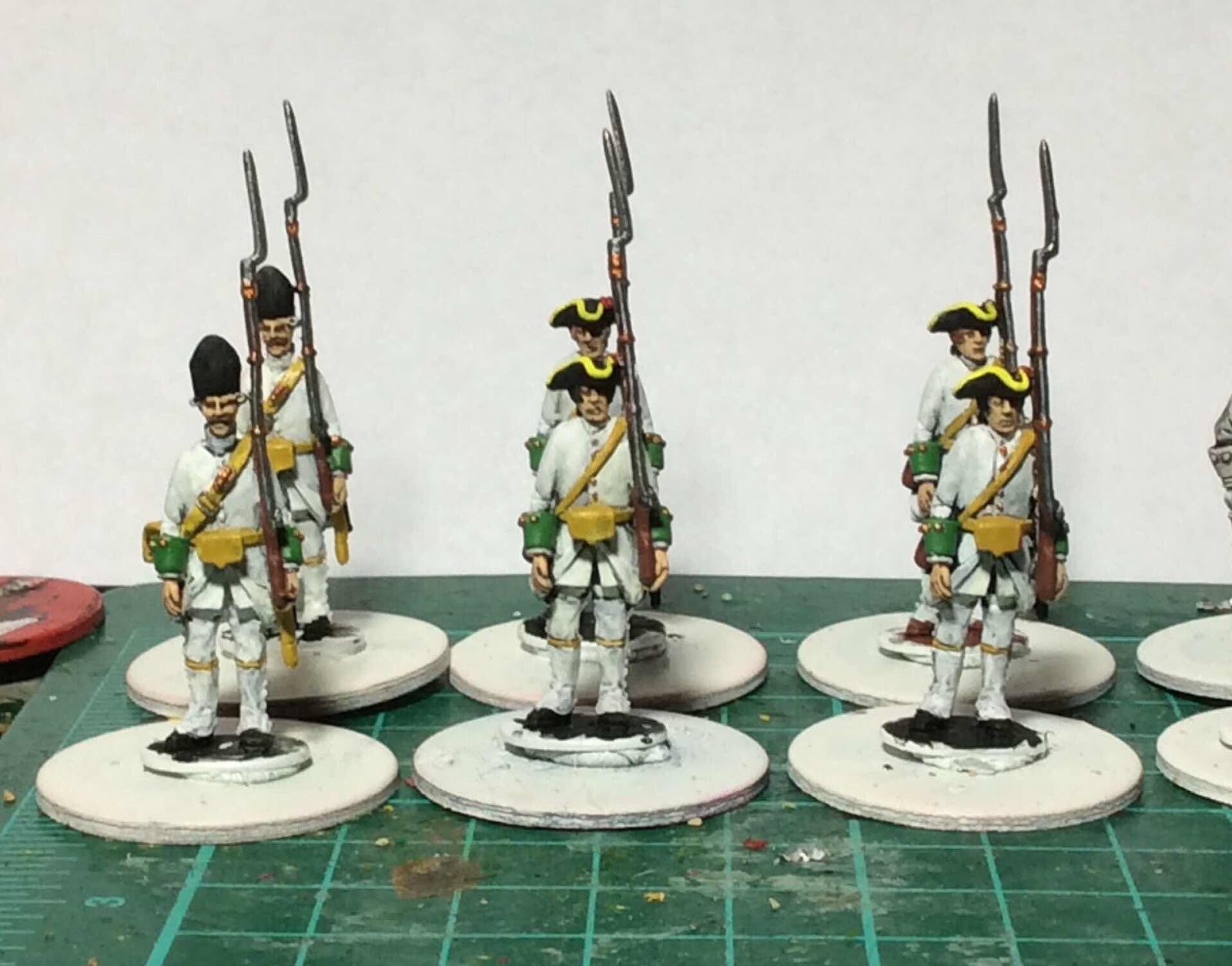 I've also been working on some 19th century figures. I have been slowly putting together a British force for the Crimea and have Coldstream Guard, Hussars and a load of character officers which make a nice little force for using with The Men Who Would Be Kings. I will also try Rebels and Patriots too as I like the scale and feel of both sets of light hearted rules.

My other 19thC project is Rome 1849. I have some rather nice vauban walls and Italian buildings and a decent amount of  red-shirted Garibaldini. To face them I need French and Neapolitans and luckily the two forces shared the same tailors, so my 1860's Naples troops can stand in for Oudinot's men. The defenders of Rome need some support however.  In addition to the redshirted volunteers there were regulars facing the French; ex papal troops and Bersaglieri volunteers from Rome and northern Italy. Several squadrons of cavalry also fought the invaders - reformed papal dragoons and a unit of Lancers.

Ive been looking for illustrations of these men and found some excellent online resources which builds upon the info given in the Osprey on Risorgimento Armies covering Papal, Roman and Neapolitan troops.

Here are some illustrations of Republican Roman regulars. 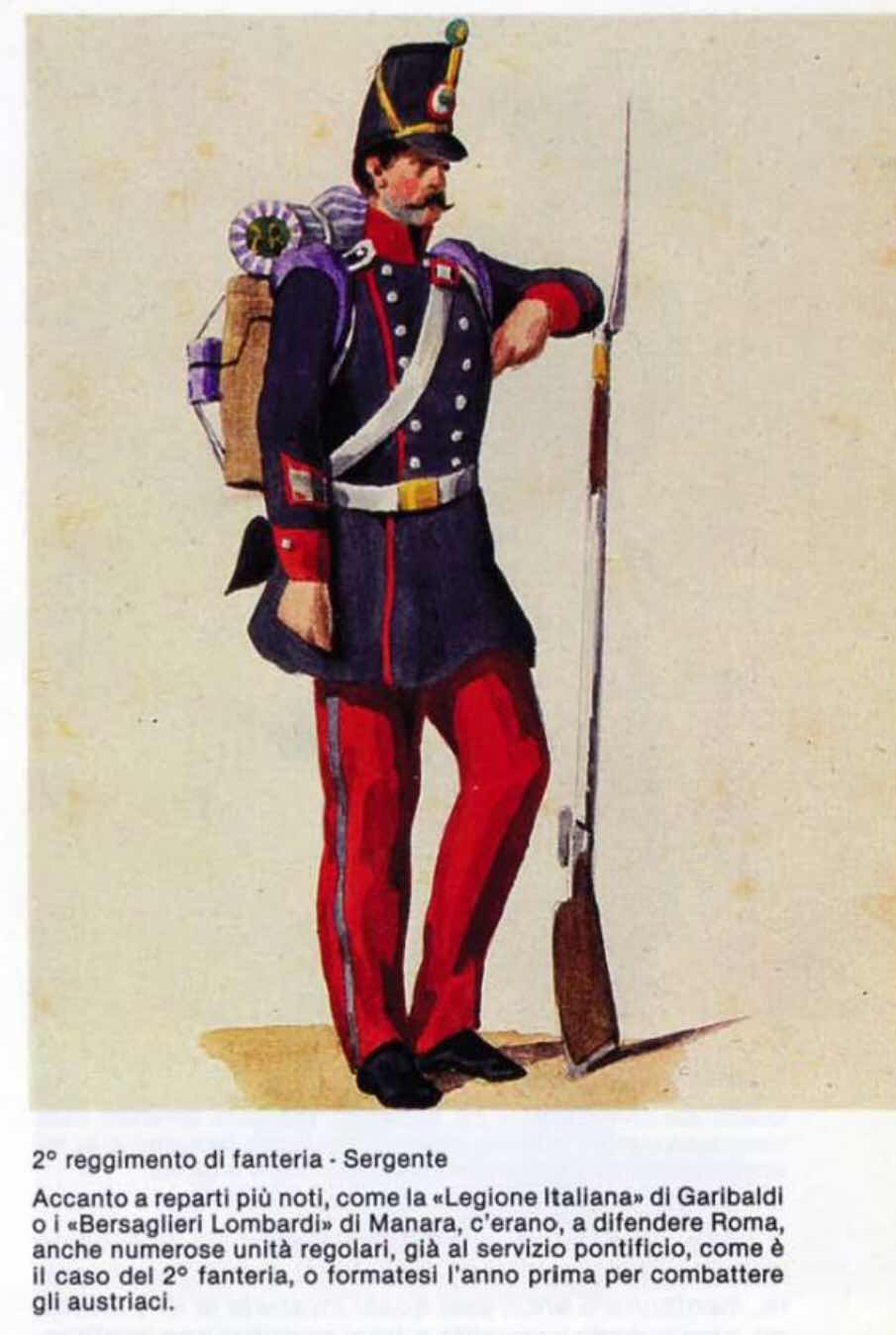 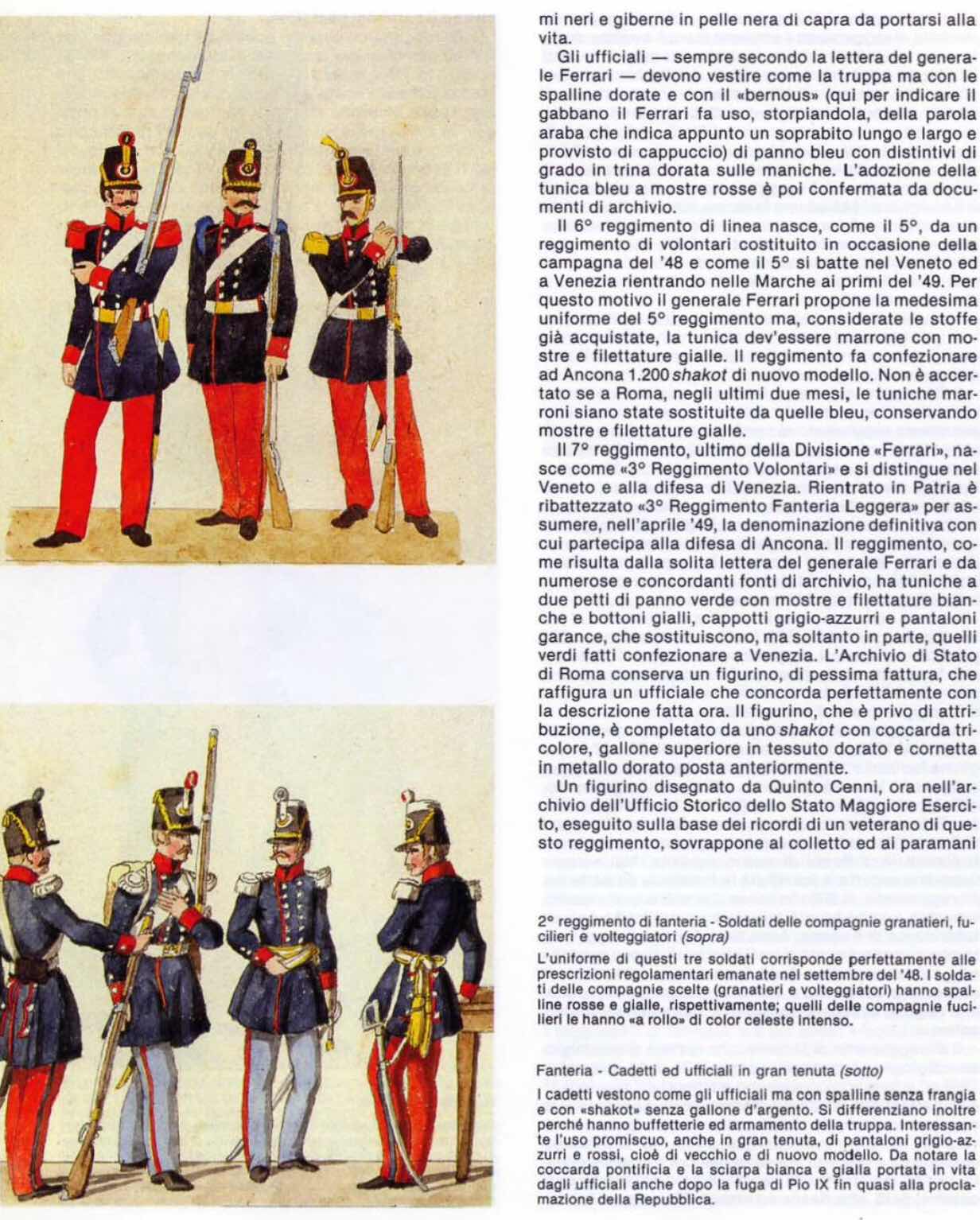 As I want these to look different from my Gringo 40s French/Neapolitan figs (also lovely sculpts!), I've chosen 1st Corps as their Mex-American and ACW ranges provide figures which are contemporary or shared similar uniforms. They are also chunky enough to (just!) stand next to Ged's big figures.

The Roman line will be early ACW volunteers in frock coat shako. I've started to paint a sample below. 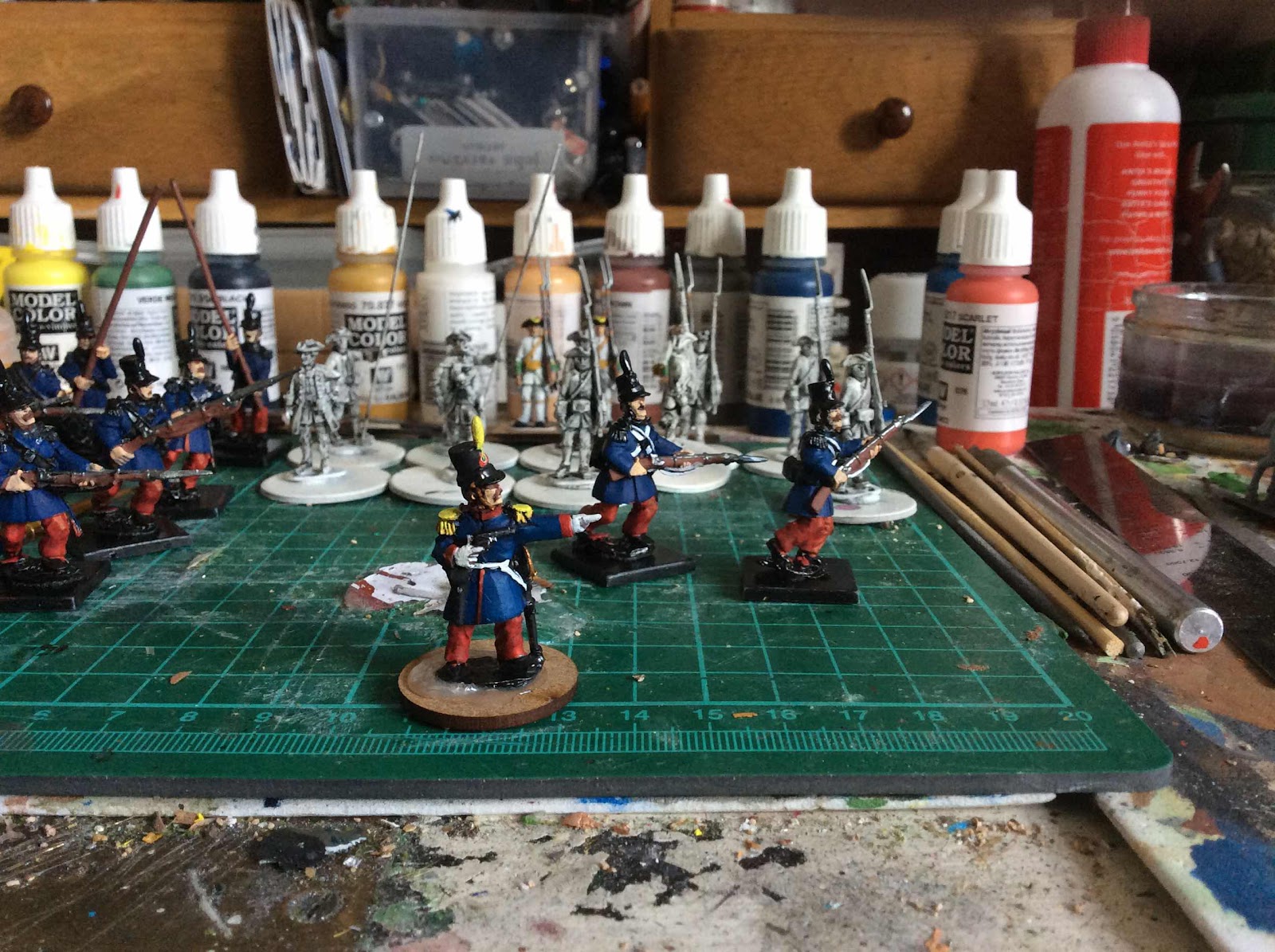