First of a few Spanish units I am painting to add to my Neapolitan army. Rgt Guadalajara, Cran Tara mini's from their WAS range.

I have to admit I struggled a bit to get the definition right with the white coats. The CT figs are very clean castings with quite subtle folds and lines in their uniforms. I used a little grey ink to define the arms and armpits and think this works....I'm sure it will get better as I add more units. 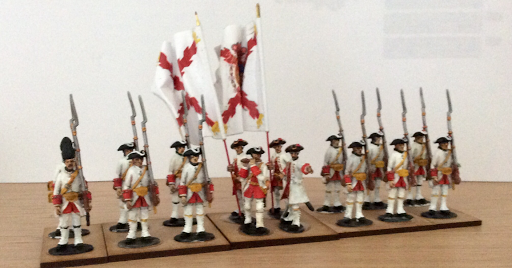 First up my long over due Russian Grenadiers for Pikemans Lament. These are Foundry - Casting Room Miniatures since Musketeer's figures (which make up the rest of my Russians) are no longer available / not quite ready to become available again!

Nice poses for a "forlorn hope" for Grenadiers - painted as Repnin's battalion.

I had intended to get basing today but other things needed my attention.

Next up is a wonderful vignette I received as a thank you from "Der Alte Fritz" Jim Purkey of Minden / Fife and Drum for services rendered to AMG17. These lot will be making an appearance in my Sugar Islands book I think....but here's a sneak preview ! 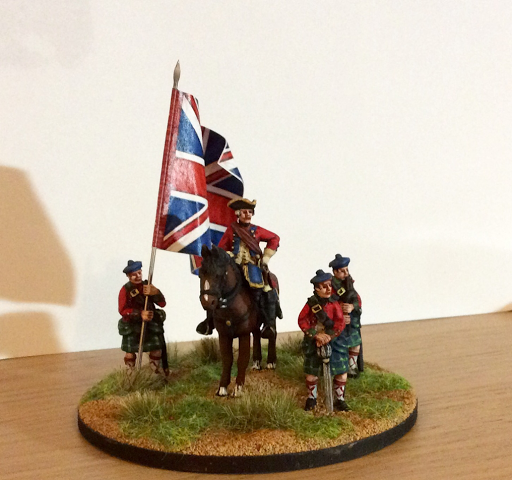 Despite being aware at the weekend I was also allowed out to play on Tuesday night!

So I had a look on the excellent Honours of War Forum and came across the Pfaffenhofen scenario. This battle involved the Austrians trying to either capture or drive the Franco-allied army from the field. Not so much a fire fight as a chase!

Being somewhat short of players, unusual for us nowadays, we had a three player game with Club member (and resident Prussian) John taking on the allies (using his Prussians) whilst I controlled the Austrians (with some Russian stand ins) with another club member Robert, (because I have light infantry, much to John's chagrin!).

An interesting fight, with plenty of melee and some good and bad dice throwing on both sides. The Austrians failed to get their Grenadiers to do anything constructive, but the cavalry charges looked great. In the end the French and their friends did manage to get away just, but were badly mauled.

The rolling terrain and lines of figures made for some nice pix.

One more game next week and then I plan to run some test scenarios for the Sugar Islands, probably using Loose Files. 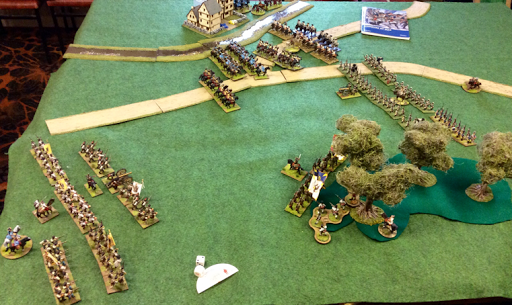 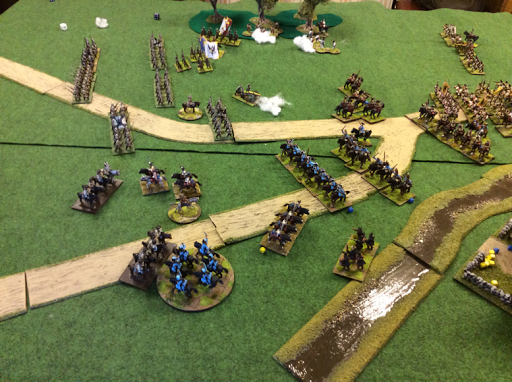 Email ThisBlogThis!Share to TwitterShare to FacebookShare to Pinterest
Labels: Honours of War

After a gentle flight down to Birmingham I met Angus Konstam at the airport and we were both collected by Tony Dillon who was also attending and lived locally. We arrived at the Chesford Grange for this years wargaming weekender and soon met up with the other attendees in the bar!

After breakfast on Saturday we quickly got the games underway. Paul Robinson ran an excellent Ramilles battle based on the fight around Franquenee. Colin Ashton, assisted by Robbie Rodiss ran Leuthen complete with baking powder snow. Graham Cummings ran Falkirk 1746 on teddy bear fur with his own and Guy Barlow's Jacobites and Martin Gane rolled out his Sudan game, the hottest terrain in what turned out to be the coolest area of the room.

I have some piccies from the games I took part in but the standards of figures, scenery, terrain and overall effort from  those hosting or helping out were very high, once again it will turn out, I am sure, to be the highlight of my wargaming year.

Steve Pearse and myself faced off against Mark Dudley and Ian Burt at Ramillies and adopting an aggressive approach led the French to victory. 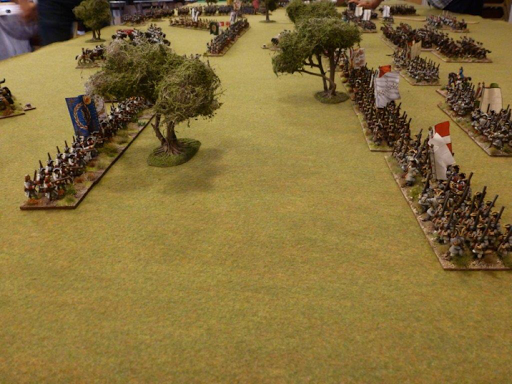 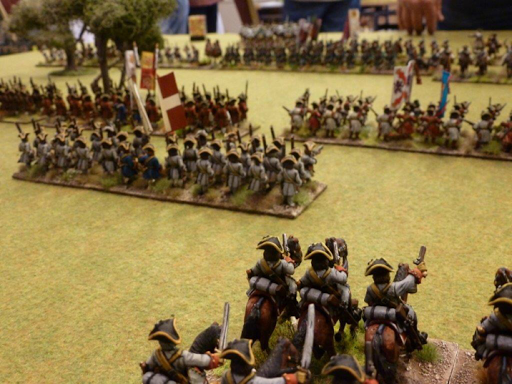 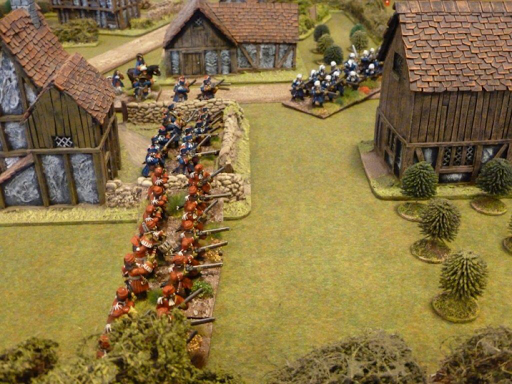 That afternoon I took on the mahdists in the Sudan - on my own (which was alas to be my downfall)! 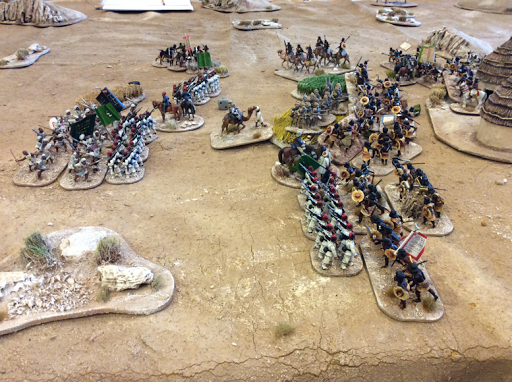 And then on Sunday (after a wonderful evening swapping stories of vinyl, turntables, music and even a little bit of games workshop with Aly Morrison and Steve Metheringham), I faced the highland clans at Falkirk with Chris Gregg as Cope we myself as Hawley. This turned out rather more successfumlly as despite some effective highland charges we were able to hold our nerve and position and with a combination of musketry and cannister send Charlie's men packing. 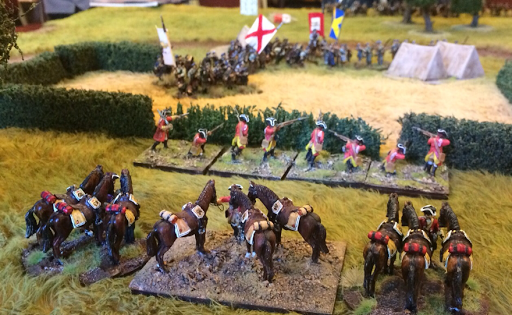 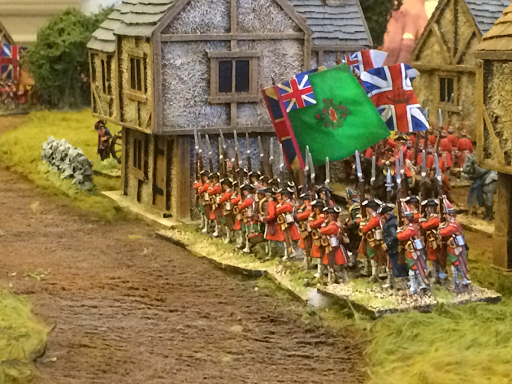 At lunch on Sunday we had a small prize giving with Tony taking home a very nice vignette by John Ray for Most Military Gentleman, Robbie taking home Most Unlucky General -  a  shiny sculpt by Aly, and Paul winning the draw (picked by his wife !) for Best Host - a copy of the Perry Twins new Travel Battle game.

I managed to pick up some figures from Graham and as a present a lovely command stand vignette of a mounted officer and highlanders from Jim Purkey who'd travelled over from the States. This latter will be appearing in the Sugar Islands book I'm sure. I also touched base with Chris about adding a couple of illustrations for that too....but no ladies in uniform!

What a wonderful weekend....

It's been a wee while since I posted. A few reasons for this, mostly work, a few family things too - but I have not neglected the hobby!

I've -
Had a most excellent weekend with Charles Grant, refighting (and losing!) Torgau. 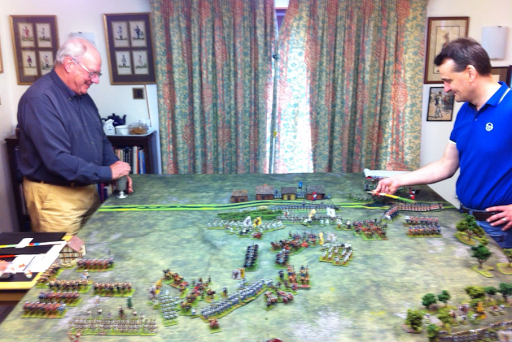 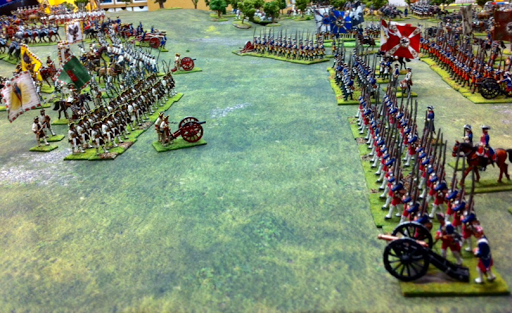 Thank you Charles, I will try not to lose 6 regiments of Grenadiers next time! 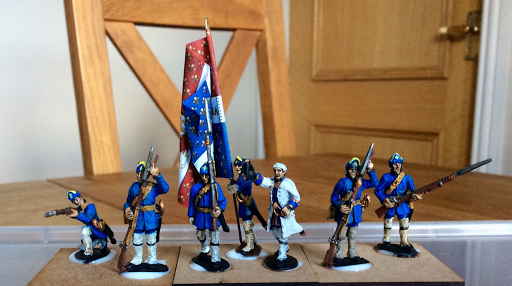 And these Spanish for my WAS in Italy project...finished now 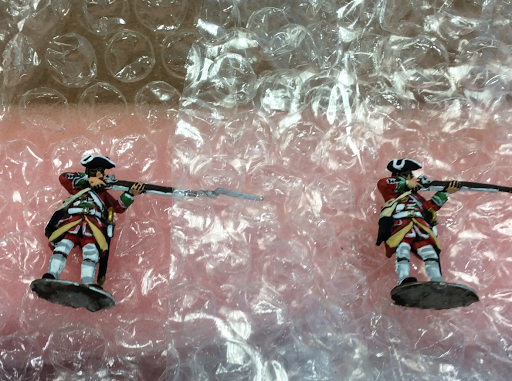 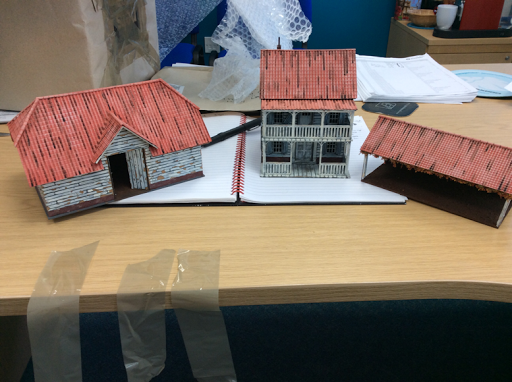 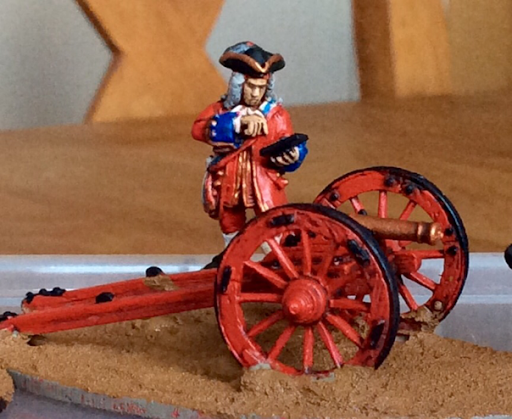 And rebasing some 19th Century Neapolitans.

Oh yeah....and been organising something called AMG17.....more about that later.....