First attempt at the 18thC colours for Hoegaarden Foot.

This is a cut and paste job using good old MS Paint. The background and wreath are taken from colours off the Warflag site. Specifically a medieval fleur de lys and SYW Reichsarmee wreath from the Wildenstein rgt, combined with a Hoegaarden logo from a beer mat! Ive used this method for my Beer Wars Medieval and TYW standards in the past.

Careful use of the copy and paste to mask other shapes and the copy transparent command create the white field around the wreath and logo. Other than that its all done by eye. It might not be straight, but printed out at 28mm size it will look ok.

Gelb Hoegaarden will have a similar but different flag...I wonder if you can guess in what way?


Posted by StuartInsch at 14:20 No comments:

I finished off the first of my figures tonight, a jäeger Amusette and crew and some quick paint conventions of some British infantry into Frei Korps
These are for skirmish games which will be the opener for my campaign. Hoegaarden's border march is breached by enemy light infantry and dragoons. The Jaegerkorps are deployed and a series of sharp actions are fought before regular forces begin to appear. 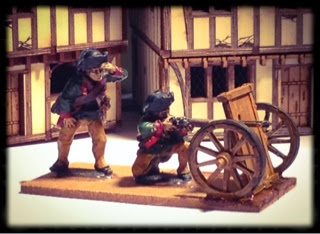 The Perry miniatures Jaeger are painted in green with red facings and cuffs - following the Hessian pattern. The Frei Korps are Front Rank British picked up from Hinds Figures to let me crack on a bit and get a game on.  A lick of grey and they stand in for Austrian Landstandische Frei Corps (honest!!) 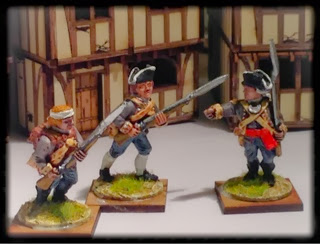 Still a bit of touching up to do, and their bases of course, but I think they'll be fine for what I have in mind and let me play while my line infantry are assembling at their depot - ie getting painted!
I plan to use Muskets and Tomahawks for these initial skirmish games. The small 200point battles use 20 or so figures on a 4x4 table so are ideal for what I am after - a raid on an important bridge and customs house, the fight for a small village, etc.
I have a game planned for late Feb, by which time as I will have a line unit or two in place.
More pics once they are completed.
Posted by StuartInsch at 23:20 No comments:

Well, we all know no plan survives contact with the enemy...and neither did mine. After compiling a list of the units I wanted, complete with uniforms, flags, grenadier info and the suppliers I intended to buy from I settled down to wait until the new year before kicking it off with an order to the suppliers.


The taxman paid a visit, just before Xmas, the bu**er, and lets just say that my grandiose plans are scuppered. Bad news!


However with every cloud comes a silver lining.


I've been gaming quite a but lately with some the chaps in the Oldmeldrum Wargames Group and we got talking about my SYW project. Another side discussion about Austrian Casquets and when they were introduced also took place and between the two my mind made a salmon like mental leap!


The Casquet was brought in after 1767 and both I and another club member have revolutionary period Austrians. Another has Prussians for the SYW, whose uniform didn't change until Frederick the Greats death. Why not therefore bring my project forward a few years and set it in the time of the War of Bavarian Succession - the Potato War of 1778-79. As this war really didn't feature much fighting and we had the figures for both sides already , I could scale back my concept and paint up an imagi-nation force for the 18thC.


The Archbishopric of Hoegaarden and the Hops War of 1778 was born.


The army of Hoegaarden would be fairly small. No more than a handful of foot and horse and a small artillery contingent, it would be supplemented by jaeger and militia and would thus allow me to play skirmish games and larger battles. (John Ray's book providing yet more inspiration!)

The infantry will be in either white or blue with dark blue and yellow facings.  Grenadiers will be Prussian style. The Jägerkorps will be the figs I bought from Charles Grant. The militia are figures from Eagle. Lastly the garrison troops are a whimsy - but the Perry hessian garrison figs are lovely!


2 hessian guns will form the battery with some amusettes (like jingols!) to support the jäger who will be able to fight in skirmish games too. The battalion guns will be added later, perhaps!


Not a huge army, but 6 units of foot, 2 horse and 1 artillery to start with is quite neat and can be bolstered with the Militia, Garrison, Austrians or Prussians to make a bigger game when needed. Best of all it's only 5 foot and some guns and command to paint. Very do-able!


Posted by StuartInsch at 12:19 No comments: