New figures for Havana and Manila....and more besides

I received some pictures from Graham at Crann Tara of new figures which Andy Stadden has completed. These will be prefect for the sieges of Havana and Manila. 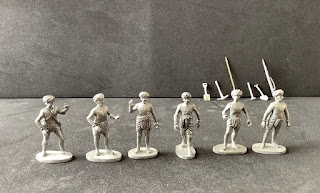 Good for adding muskets and melee weapons to as well as for helping to dig the siege lines at Manila or for early in-uniformed sepoy peons.
British Sepoys 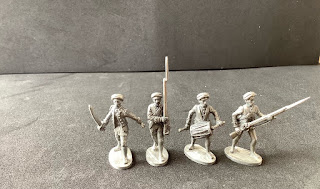 600 of these at Manila and of course a staple of combat in India too.
French Sepoys 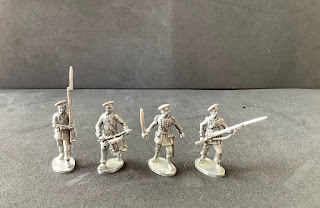 It wasn't just the British who made use of Indian soldiers.
Manila Black Militia 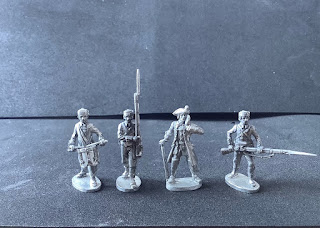 The Spanish deployed 3 types of militia at Havana. White, multiracial and black units known in Spanish as "blanco", "pardo" and "moreno". The blancos and pardos wore a typical European uniform of coat, waistcoats and tricorn. The Moreno unit wore a simplified version of this with a cap with turned up flaps or sewn on panels and front and back.
These uniforms were first recorded after the siege, but lasted through to the AWI and were worn by several of Spain's Caribbean and American possessions. These figures will be prefect to the 1760's through to the 1780's.
Andy has done a great job in sculpting these and Graham tells me they'll be ready in a couple of months.
Can't wait to get my mitts on some!

Nice Figures, looks a bit like old book illustrations -in a good way!